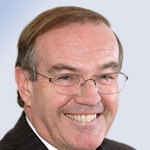 In December 2003, John Taylor completed his five year term as Director General of Research Councils, responsible for the UK Science Budget and the seven Research Councils funding research across the whole spectrum of science and technology in the UK science and engineering base.

He was formerly Director of Hewlett Packard Laboratories Bristol, where he developed major programs of research in areas including internet security, wireless communications, telecommunications, personal digital imaging, software engineering and mathematics. Earlier, he lead various research groups at RSRE and ARE in secure computing and communications, command and control.

He was President of the the Institution of Electrical Engineers (now the IET) in 1998-9 and is a Fellow of the British Computer Society and the Institute of Physics. He was chair of the UK South West Regional Development Agency’s Shadow Science and Industry Council in 2004-5. He chaired the UK Technology Foresight Panel in IT Electronics and Communications (ITEC) until December 1998 and led the UK Foresight project on Cognitive Systems in 2002-3. He launched the UK e-Science program in 2001