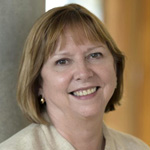 Last month marked the 25th anniversary of the ‘World Wide Web.’ In countries like the UK and the US where access to the Internet is relatively easy and affordable, the Web has become so integrated and entwined with our daily lives that now it feels impossible to live without.

In honour of the World Wide Web’s birthday, I interviewed Dame Wendy Hall on her fascinating work on Web Science, which is the study of the large scale technological systems like the World Wide Web, as well as the relationship between people and technology.

Dame Wendy helped pioneer research in multimedia and hypermedia. Her team at the University of Southampton in the UK invented the Microcosm hypermedia system, which predates the World Wide Web. Dame Wendy’s research has supported the development of the Semantic Web, and led to the study of Web Science. In 2006, she became a founding co-Director of the Web Science Research Initiative (WSRI) along with Sir Tim Berners-Lee, the inventor of the World Wide Web and co-winner of the 2013 Queen Elizabeth Prize for Engineering.

Sally Mouakkad: We often hear the terms “Internet” and “the Web” used interchangeably, but they are different – can you explain a little more?

Dame Wendy: The difference is fairly straightforward but often overlooked. The Internet is essentially the network of networks that connects many computer systems around the world. What the Web offers is a way to share information between those computers and networks through a browser that sits on top of this network.

The browser that we use and the technology behind the Web hides the differences between the networks and computers so that users don’t need to know where the data is stored or what kind of system is storing it. Before the Web, computer programmers were often needed to move data between different systems and this is essentially the problem that Tim Berners-Lee was trying to solve when he designed the Web.

SM: Your team at the University of Southampton worked on linked information systems even before the Web. Can you tell us about the differences between these two and why this difference was important for the success of the Web?

DW: Even before the Web we knew that the true power of information laid in linking it. The desire for powerful systems that could link huge stores of information intelligently brought us to design and build Microcosm. One of the key differences between early hypermedia systems like Microcosm and the Web was that the Web was much more tolerant of failures like broken links, missing pieces of information and the assumption that, at a global scale, information is “scruffy” – you can’t rely on everything being perfect all the time especially if you aren’t managing the system yourself. Surprisingly, one of the key reasons for the success of the Web was that annoying message “Error 404 – page not found.” Designing in the assumption that pages were not going to be found (or links would break) allowed the Web to scale to literally global proportions across millions of servers and billions of pages.

Overall Tim’s insistence on openness, flexibility and on giving away the technologies for the Web placed it in an ideal place to grow and after 25 years the growth has been truly extraordinary. The Web can now be found in almost all aspects of modern life and the importance of understanding what it means for society to live WITH the Web or what it would mean to suddenly be WITHOUT the Web are key questions for Web Science.

SM: Is there anything you can share with us about any current trends in Web Science or the direction it’s heading in the next 10 years?

DW:  As more and more people and devices are attached to the Internet, the flood of information (so-called Big Data) is almost certain to increase.This brings technical challenges in handling an ocean of data gathered from people and from the all the devices they interact with (the Internet of Things – [the idea that all objects, cars, ovens, etc., could be connected to the Internet]) but equally there are ethical challenges around privacy and the use of this data. Whilst the ability to, say, profile patients to create targeted (or personalised!) medicines and treatments could save many lives, the same type of technology to profile us can become unnecessarily intrusive. We have seen recent issues around the excessive gathering of information about public/private individuals and it is re-assuring to see a robust response to this from both the US and UK governments in terms of regulating what sorts of data are (or are not) in the public interest to gather and store.

SM: You currently lead the Web Science Trust, a non-profit based at the University of Southampton that seeks to support and promote the “global development of Web Science.” Could you tell us more about the Workshops you host and why you host several in the US?

DW: I think the first point to make is that observation in the sense we mean should not be confused with surveillance. Web Observatories are designed for researchers to look at the “digital footprints” we leave en masse on the Web in order that we can understand more about the way in which the Web changes us even as we change it.

We work primarily with anonymised data to study broad trends across a range of social areas such as health, crime, government, politics, law, commerce and many others. To do this we are setting up a global network of Web Observatories that will gather data about each of these areas and, like our colleagues in Physics and Astronomy, who share their data, we believe we will reach far deeper conclusions from far more data and far more efficiently, through this process of sharing. These Workshops are intended to bring more partners up to speed on how to create Web Observatories and how they can share data and tools. Our network of Web Science labs is spread across the world and a number of partners are here in the US.

SM: What is it that makes the UK & US key partners in the area of Web Science?

DW: The original collaboration for Web Science was between the University of Southampton in the UK and MIT in the US and ever since then the relationship has remained close. The Web Science Trust is located in the UK but our board of trustees represents our strong partnership with the US and in fact our Web Science conference will be hosted in US again this year.