Congratulations to Sir Tim-Berners Lee for featuring in the Olympic Opening Ceremony. Web Scientists will have no troubling identifying Sir Tim Berners-Lee as the inventor of the World Wide Web and also a founder of the Web Science Trust. As the BBC pointed out, it seems slightly ironic that the NBC anchors commenting on the Olympic Opening Ceremony had to ‘Google’ to find out who Sir Tim was. 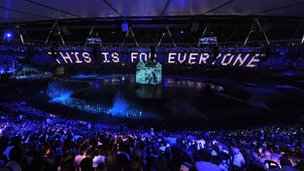