Web Science PhD students Rob Blair, Faranak Hardcastle, Chira Tochia and Jack Webster share their experiences, highlights, observations and some of the Brave Conversations they had. 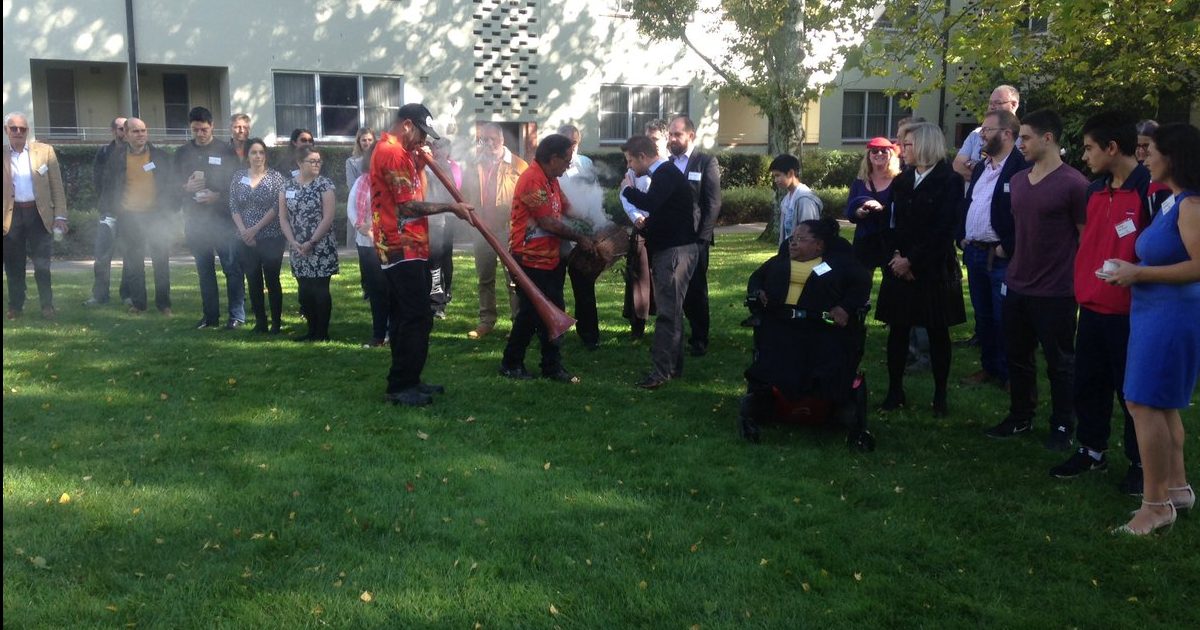 We travelled 10,631 miles from Southampton, UK to Canberra, Australia to have the Brave Conversations that needed to be had about the changing relationship between humans & technology. There was a plethora of speakers from academia, government and industry including University of Southampton’s Dame Wendy Hall, Professor Susan Halford, Dr Ramine Tinati and PhD researchers to represent Web Science.

This was a very interactive two-day conference with mini round table conversations, panels, debates and fishbowl discussions taking place. Not everyone necessarily stood up in front of the other attendees and shared a strong opinion though, some used this as an opportunity to observe the dynamics between different stakeholders whilst communicating their alternative perspectives about the Web, the Internet and future of technology.

Day two began with a wonderful Aboriginal smoking ceremony. This is a traditional way to welcome newcomers on to the land, in this case of Ngunnawal country. The ceremony was an interesting lesson in Aboriginal culture and a sensitive way to acknowledge the history of the nation.

As the programme was more structured, day two unfolded at a different pace and participants were able to sit back and spend more time contemplating over the ideas being put forward by different industry, government and academic voices. The day’s activities included panel discussions, relatively free-form interactive activities and a participatory roundtable discussion.

A second panel discussion was a debate on whether a machine-based world is a better world. This debate involved Chris Monk, Katina Michael, Tris Lumley, Leanne Fry, Ibrahim Elbadawi and Gavin Smith, who made considered arguments for and against the value of a machine-based world. Whilst the question was fraught from the start, as making the distinction between man and machine is a problematic one, it provided an opportunity to tease out some of the opportunities and challenges presented by technologies such as robotics and AI.

Conference participants were invited to participate in a roundtable discussion about ‘the good life’, which sought to address questions relating to the ethics and philosophy of the web and the ‘right’ future for people and machines. This roundtable involved Barbara Wilby, Ellie Rennie, Rob Fitzpatrick, Jeffrey Broadfield and moderated by Ethics Centre’s Dr Simon Longstaff. This was an interesting activity two seats were left vacant at the roundtable to allow for people in the audience to join in the discussion at any time. This helped to involve a range of perspectives in the debate. For example, the college students who were invited to the conference has an opportunity to contribute to the debate, which we found inspiring and refreshing.

The day concluded with a panel discussion addressing the important question of ‘so what? – what did we get out of these last two days having brave conversations, and how can we take things forward in a meaningful way? For example, there was concern that the conversations we had weren’t brave enough and there was often a temptation to slip into conjecture. Instead, our brave conversations would have benefitted from being grounded in research and focussed on more specific research and/or policy questions. Consideration was also given to how we might take the conversations we had the conference forward and translate it into some kind of action. The jury is still out on this question, but it was something we all left thinking about and hope we can address in weeks, months or years to come.

You can find out more on the Brave Conversations Conference site, look up comments on Twitter: #BraveConversations / #BraveConvos, and read the Public Purpose and Intersticia blog posts.

Special thanks to the organising committee for allowing us the opportunity to attend and for making this whole conference happen. These Brave Conversations will continue to take place in Washington and the UK soon.