Web Science PhD students Rob Blair, Faranak Hardcastle, Chira Tochia and Jack Webster share their experiences, highlights, observations and some of the Brave Conversations they had 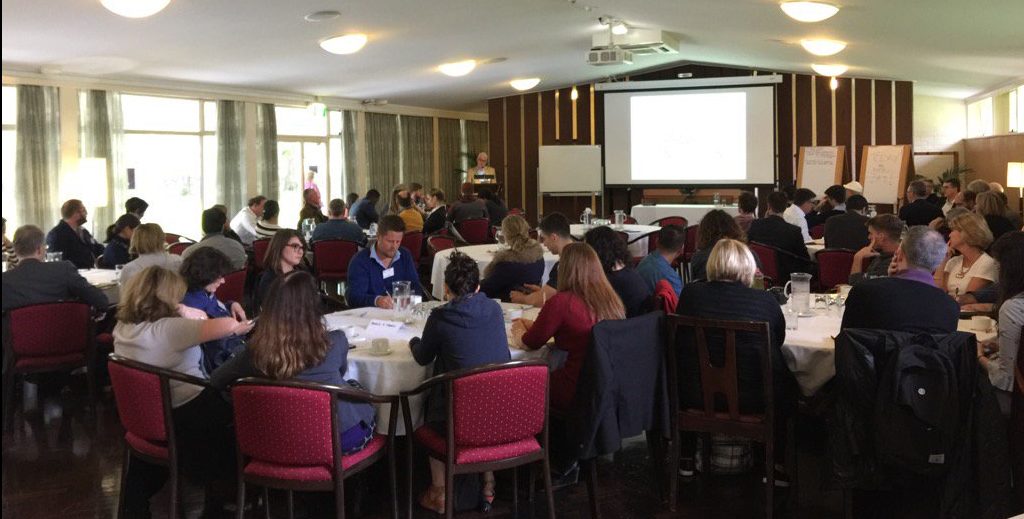 We travelled 10,631 miles from Southampton, UK to Canberra, Australia to have the Brave Conversations that needed to be had about the changing relationship between humans & technology. There was a plethora of speakers from academia, government and industry including University of Southampton’s Dame Wendy Hall, Professor Susan Halford, Dr Ramine Tinati and PhD researchers to represent Web Science.

This was a very interactive two-day conference with mini round table conversations, panels, debates and fishbowl discussions taking place. Not everyone necessarily stood up in front of the other attendees and shared a strong opinion though, some used this as an opportunity to observe the dynamics between different stakeholders whilst communicating their alternative perspectives about the Web, the Internet and future of technology.

We started day one by a 5 mins exercise in which we looked up the name of the person next to us and then talked about what we found. Then we moved on to a workshop by Pia Waugh. She asked us to write on a piece of paper three things: uncomfortable, inspiring/interesting and incomprehensible. Then she presented some thoughts and asked us to list some of what we have heard into these categories. She ended by raising some questions: e.g. Who are and aren’t you building for? What does being human mean to you? What is the default in the society? What do we value in the society? The questions of rights and responsibilities, etc.

Despite the fact that Pia’s questions raised valid concerns about the direction of the evolution of the Web and the Internet, in general Pia’s provocation was that she represented a techno-utopian, without any need for state intervention. Whilst this is one of the common views held about the governance of the Web and the Internet, it is not the only view. Some advocate a multilateral, multi stakeholder, or unilateral model of governance for the web and the internet. In this respect, Pia’s presentation expressed views about one side of the spectrum.

Pia asked tables to discuss what had they found uncomfortable about what was said. When tables reported back on this, the answers varied: Some questioned the suggestion that “we” have shifted from an era of belief to rationalism, and found this assumption uncomfortable. Some found the notion of “We” problematic, and the underlying assumption of homogeneity that undermines multiple vested interests and the tension amongst them uncomfortable.

Then Pia asked the tables to discuss and report back on what they had found most inspiring that would have wanted to grow and develop in the future. Again answers from tables varied largely from sustainability and renewable energy to health care and well-being.

She then asked the tables to choose and discuss one of those inspiring things and report on how it could be designed for the future to induce a systematic change. Designing change was understood from different levels. Some came up with mechanisms to nudge individuals to change their behaviours. Some other suggested nudging corporations through rewards/punitive mechanisms and some thought of deliberative changes at the infrastructure level.

The second session of the day “Too many chiefs and not enough Indians” was run by Nicholas Gruen, CEO of Lateral Economics’, explaining his thoughts on why change looks like Groundhog Day. Nick explained how the human world is a nested ecology of public and private goods economics using the metaphor of arteries and capillaries, through a very enjoyable and witty presentation.

Then we had a lunch break. But before that Martin Stewart-Weeks, Reporter for the conference, reflected with what he perceived to be the highlights of the morning. He suggested that this morning was about 4 things:

Some of these points can be problematised and leave more questions than answers. For example, what does “self-government” mean? Does it refer to the market and those in favour of self-regulation for addressing the issues surrounding it? Or is the expectation of the individuals to be “reflexive” about their actions and their consequences?

After this we were assigned to different tables with pre-assigned themes, questions, and facilitators. This session was interesting from multiple angles. The questions, discussions, and answers, the groups dynamics, and the relationship of the chosen questions in regards with the themes.

The session on day one ended with Martin summarising his own interpretations of the discussions, questions, and interactions in the day. He concluded that “we” need to talk about 4 things if we want to have brave conversations:

Then he asked participants to write down one really big question that really bothering them this morning. Participants wrote their questions on sticky notes and put them on a board to be categorised into segments by Martin the following morning.