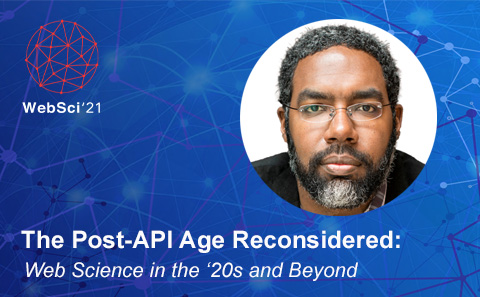 Despite its brevity, the essay “Computational research in the post-API age” (Freelon, 2018) sparked an interdisciplinary discussion about options for collecting and analyzing social media data at a time when platforms were imposing tight restrictions on their formerly open APIs or closing them altogether. This keynote will explore some of what has and has not changed in the ensuing three years for computational researchers interested in social media data. In particular, it will focus on three key issues that have increased greatly in prominence since 2018: (1) the process of collaborating directly with social media companies on research projects, (2) the ethics of hacked and leaked datasets, and (3) ethno-racial and gender inequities in web- and computational social science.

Deen Freelon talks about research data sourced from social media platforms to support computational research approaches in social science and whether both accessibility and representation have changed in the intervening period since his influential 2018 paper.

The recent surge in NFT coverage in tyhe technology and financial press was typified by the story of an early NFT auction in which an investor paid $2.9m for an NFT linked to Twitter Founder Jack Dorsey’s first ever Tweet on the platform. This, it was claimed, was an example of how new value could be created using NFTs and how investing in buying and selling NFTs would be the next big thing. The sales of NFTs have indeed grown large though the residual value, and ROI on the resale of NFTs have been much less impressive.

In the interim it has been widely reported not only that NFT exchanges have struggled with growing numbers or fraudulent issues, fake NFTs, market manipulation, price rigging and thefts (ironically specifically the issues that block chain technologies are intended to prevent) but also that a lot of the apparent liquidity in NFT markets (the number of buy/sell transactions) has been artificially (and illegally) inflated by the same parties being on both sides of the transaction in any attempt to give the impression that NFT are easily/quickly traded and that prices are going up.

In what must be considered a massive PR blow to the industry as a whole, the buyer of this famous first Tweet NFT, Sina Estavi has recently tried to sell what is probably the most famous NFT in existence for sale referring to it as the “Mona Lisa of the Digital World” for an eye-watering $48m on the OpenSea NFT exchange (asking more than 16x what he paid for it in March 2021) and was met with initially offers of only hunderds of dollars and at the time of writing a highest bid of just $6’800 – some 0.000141 of the asking price and barely 0.0023 of what he paid for it. Surely a “rug pull” of epic proportions.

Our condolensces go to Mr Estavi who had allegedly planned to donate about $25m of the expected proceeds to charity though we think he has badly mis-judged what he has purchased. While he claims this NFT is the “Mona Lisa of the Digital World” – something which would indeed be priceless, surely what he has actually bought is an NFT for a photo of the Mona Lisa which can be bought in any gift shop for a few dollars or downloaded from the Web for free.

Perhaps more correctly he bought $2.9m of attention/publicity for himself and the new NFT exchange he is launching whilst the NFT that remains behind when the news stories and buzz are forgotten actually captures very little inherent value beyond the attention and novelty they generate. Who was the second woman to fly solo across the Atlantic? The second athelete to break a 4-minute mile? No-one remembers and I suspect the the second person to own this NFT might be equally forgetable.

Perhaps NFTs are becoming a new currency of the “attention economy” joining subscribers, likes and upvotes. In any case potential investors must now surely be ultra-careful about certificates pointing to notional assets that are hard (impossible) to differentiate from the free alternatives.

Despite claiming in a recent interview that “technically” he could afford to purchase Twitter personally, Musk has chosen instead to fund the $44bn (£34.5bn) takeover with $21bn of his own money plus debt structures.

The threatened poison pill response from the Twitter board appears to have been ineffective in the light of threatened legal action by Musk against the board members who, surprisingly, own virtually no Twitter stock themselves leaving themselves open to serious fiduciary malpractice suits if they had not entertained Musk’s offer as being of major benefit to the shareholders.

Musk had publicly offered to “save $3m a year” on Twitters bottom line by not paying any board members (Musk himslef takes no salary for any of his management roles) and so it remains unclear whether the current board will simply disolve, whether founder Jack Dorsey (a friend of Musk) will now remain and who will steer the company in the short term. Musk will appear at an employees meeting to handle questions in the coming days/weeks.

Musk has made much of the need for a free speech platform for the world as a whole – calling it “the bedrock of a functioning democracy” even if that free speech may be negative or oppose our own views. He is known to prefer “timeouts” to lifetime bans similar to the one imposed on ex-president Trump.

“I hope that even my worst critics remain on Twitter, because that is what free speech means,” he tweeted on Monday.

One critic (Robert Reich former US Secretary of Labor) alleged in the Guardian that Musk had bought Twitter “to preserve his own free speech and not free specch for other people” and so we will need to wait to see what free speech means under a new Twitter and whether Musk can live up to his ambitions for a better Twitter.

This year, the ACM Web Science Conference will run in hybrid mode. Both online and in-person presentations will be streamed, and most of the activities will be set up to increase the experience for in-person interaction.

The WebSci’22 conference organizers seek to foster an accessible and inclusive conference. They recognize that ACM WebSci’22 attendees have differing abilities to pay, and have instituted a tiered pricing program to accommodate different financial needs.

For more information and to register go to

In this talk, Jennifer Zhu Scott talks about the need to create global inclusive data infrastructures and processes to address global issue 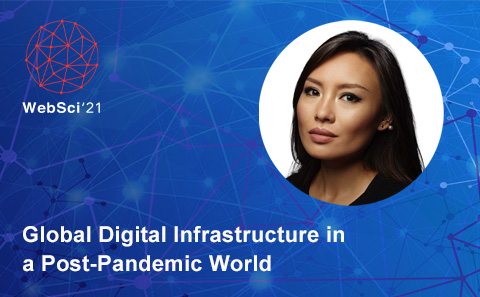 Technology has become a transformative force in almost every aspect of our lives. It permeates our personal, economic, and political life. However, large for-profit tech companies or a handful of tech-savvy governments dominate the vast majority of digital services and solutions. Such a reality of our current data economy means highly concentrated data control and ownership.

The global pandemic is both a global public health and economic crisis. However, it also exposes the painful absence of a global digital infrastructure to provide critical services such as COVID-related data interoperability between countries to accelerate safe reopening. Billions of people are being vaccinated and tested for COVID. How should they prove and record their testing and vaccination data? Who should have access to and control such data? As the world reflects on a more responsible and inclusive data economy, how can we take the opportunity to build a global digital infrastructure that belongs to people from all countries?

This talk discusses the technical as well as the governance considerations for a viable global solution, and what might be the future implications to the global data economy.

Jennifer Zhu Scott talks about the need to create global inclusive data infrastructures and processes to address global issues such as Pandemics and future global opportunities. She notes that whilst individual businesses and governments must necessarily be part of solution, the benefits of such global systems should lie with the public (humanity) at large rather than only privately to a small number of mega-corps.